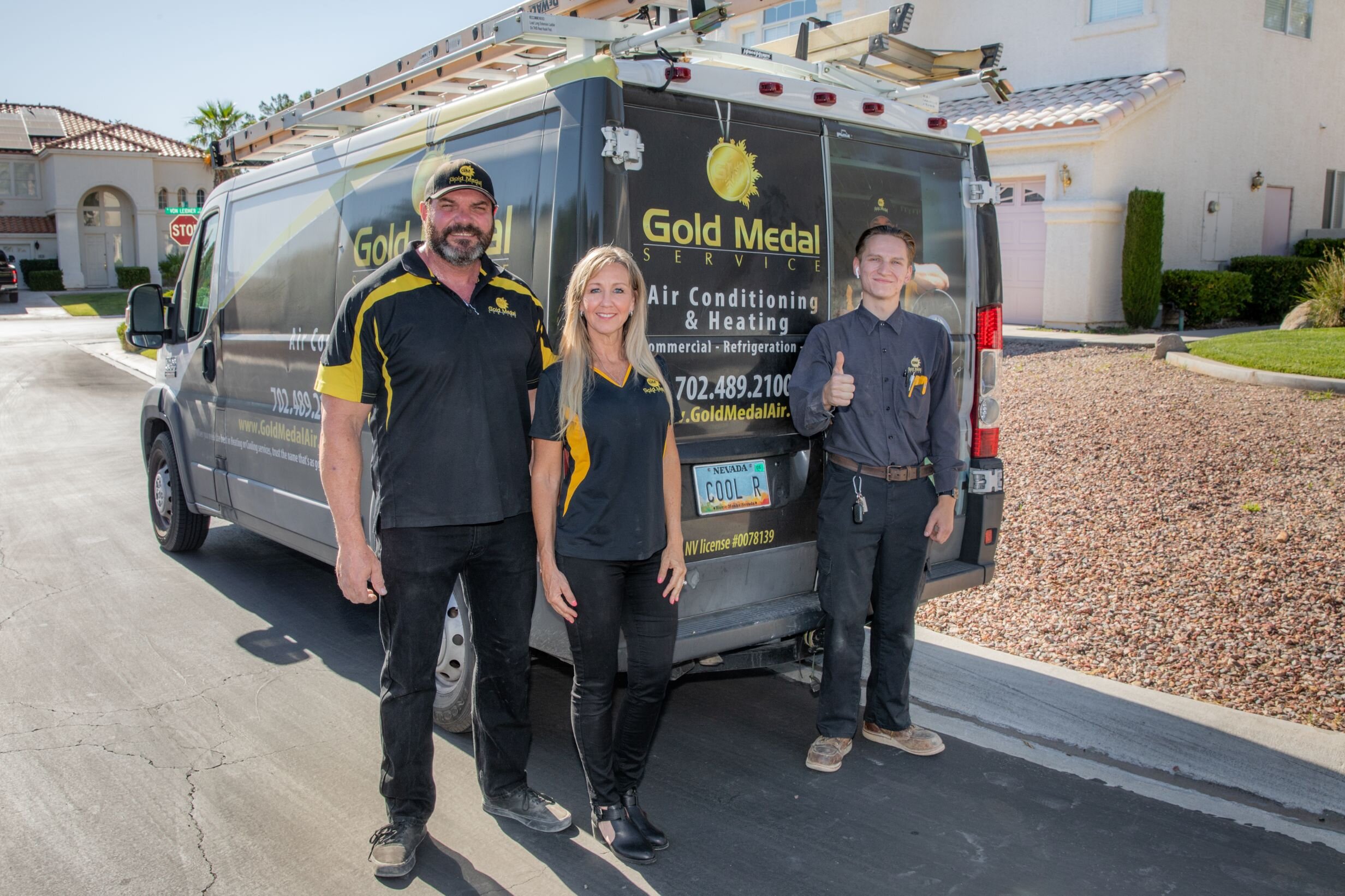 When You Need The Best In Heating & Cooling, Trust The Name That’s Good As Gold

Gold Medal Service - About Us

Our Las Vegas summer brings abundant sunshine, but can also be scorching and lengthy. The winter season, on the other hand, no matter how short, can still bring a chill in the air. That is why if you are a resident of Las Vegas, air conditioning and heating are of utmost importance. Since 1987, Gold Medal Service has provided high-quality AC and heating services to countless customers in Las Vegas at a competitive rate. We are a service-driven HVAC company dedicated to providing the highest possible comfort for you and your family.

LET US HELP YOU WITH ANY OF YOUR HVAC NEEDS

With nearly 30 years of experience, Gold Medal Service delivers the gold standard in air conditioning and heating repair, installation, and maintenance. Whether you need to have your old HVAC system repaired or replaced, you can rest assured that our certified technicians and installers are knowledgeable in servicing any heating or air conditioning brands and models available in the market. As our valued customer, you can expect honest and professional service from us at all times. We ensure that with every heating and air conditioning service that you need, we provide superior quality and excellent customer service.

With nearly three decades of experience, we have a proven track record of delivering only high-quality workmanship and exceptional customer service to countless residents in Las Vegas.

DEDICATED TO DELIVERING THE HIGHEST LEVEL OF COMFORT

In the years that we have been in this business, we credit our success to the long-term relationships we have built with our customers. We know that it is through your trust that our company continues to thrive. Our team does not resort to overselling products and services that you do not need. We are straightforward with our prices, and we never perform a job that we have not discussed. With Gold Medal Service, you always get honest and professional Las Vegas air conditioning and heating services.

GOLD MEDAL SERVICE IS AVAILABLE 24/7 FOR YOUR HEATING & COOLING NEEDS.

Meet the owners, Jonathan and Tana Magel, whose focus is on Gold Medal quality. After vocational training in his senior year of high school, Jonathan participated in an HVAC Olympics SkillsUSA - competition. Jonathan competed, first in locals and then the regionals. He went on to win the State SkillsUSA Gold Medal at age 18.

His passion has not wavered since then, and his goal is always that the system will not just work, but also wants it to look nice when he's finished. He doesn't do shortcuts, because, after 30 years of experience, he still believes in THE GOLD STANDARD.

After winning the Gold Medal in the Nevada Vocational Industrial Clubs of America competition, he discovered, much to his surprise, a realm filled with unlimited opportunities. Jonathan began working as a start-up technician for a large commercial contractor and eventually crossed over into the service side of the industry. He was involved in working with large tonnage HVAC systems and industrial refrigeration.

He obtained a position as a Senior HVAC Technician at the University Medical Center in Las Vegas, but Jonathan still had a strong desire to perfect his craft. During his tenure at this five-building campus, he learned the intricacies of high-pressure boilers, low-pressure chillers, pneumatic and DDC control systems, and energy management. Jonathan then capitalized on his HVAC/R knowledge and, with his partners, obtained a Nevada Mechanical Contractors License. He operated and maintained a thriving residential/light commercial HVAC/R company for several years.

In addition, Jonathan accepted the opportunity to teach a Troubleshooting class for Clark County Community College in the late nineties.  Recognizing his passion for HVACR and education, he remained an adjunct instructor at CCSN for six years. Along with Troubleshooting, he also taught Theory of Refrigeration, Basic Electricity, Electric Heating, and Cooling, Heat pumps, and EPA section 608 classes.  This was in addition to developing curriculum, offering specialized training in refrigeration to facilities employees, and volunteering his time to promote HVACR to high school students.

After becoming the School Director at the Advanced Training Institute, Jonathan utilized his talents to design and implement an intensified certificate HVAC/R program at their facility in Las Vegas, NV.

With an enthusiastic approach to HVAC/R and teaching, Jonathan helps educate and prepare students for careers as HVAC/R technicians at ATI. Having experienced the student aspect of classes himself, he can attest to the time and dedication required to be successful with them. Jonathan also demonstrates the possibilities that can be achieved in the industry through hard work and dedication. Through personal experience, Jonathan has learned that perseverance and hard work is a recipe for success regardless of industry or background, a philosophy and legacy he works to instill in the students he educates. As well as teaching with his partner Travis Rider, Jonathan oversees the company’s operations and is actively involved with the continual business growth and development of Gold Medal Service.

Las Vegas weather extremes can create performance issues! If your HVAC system fails after hours, you can call us for help, day or night. Emergency service is available for both air conditioning problems or heating issues. We will treat an HVAC emergency as though it were a problem in our own home!

When we respond to an emergency service call, we will troubleshoot, identify the problem, and explain it in full detail so you’ll understand its nature. Then we will make it operational again as swiftly as possible.  Many emergency HVAC problems can be avoided by having regular periodic maintenance service. That’s why we offer periodic preventative maintenance for your system. It’s the easiest, most effective way to keep your HVAC in peak condition and avoid unexpected emergencies.

If that emergency occurs, there’s no reason to be miserable! We can have your unit back up and running fast. 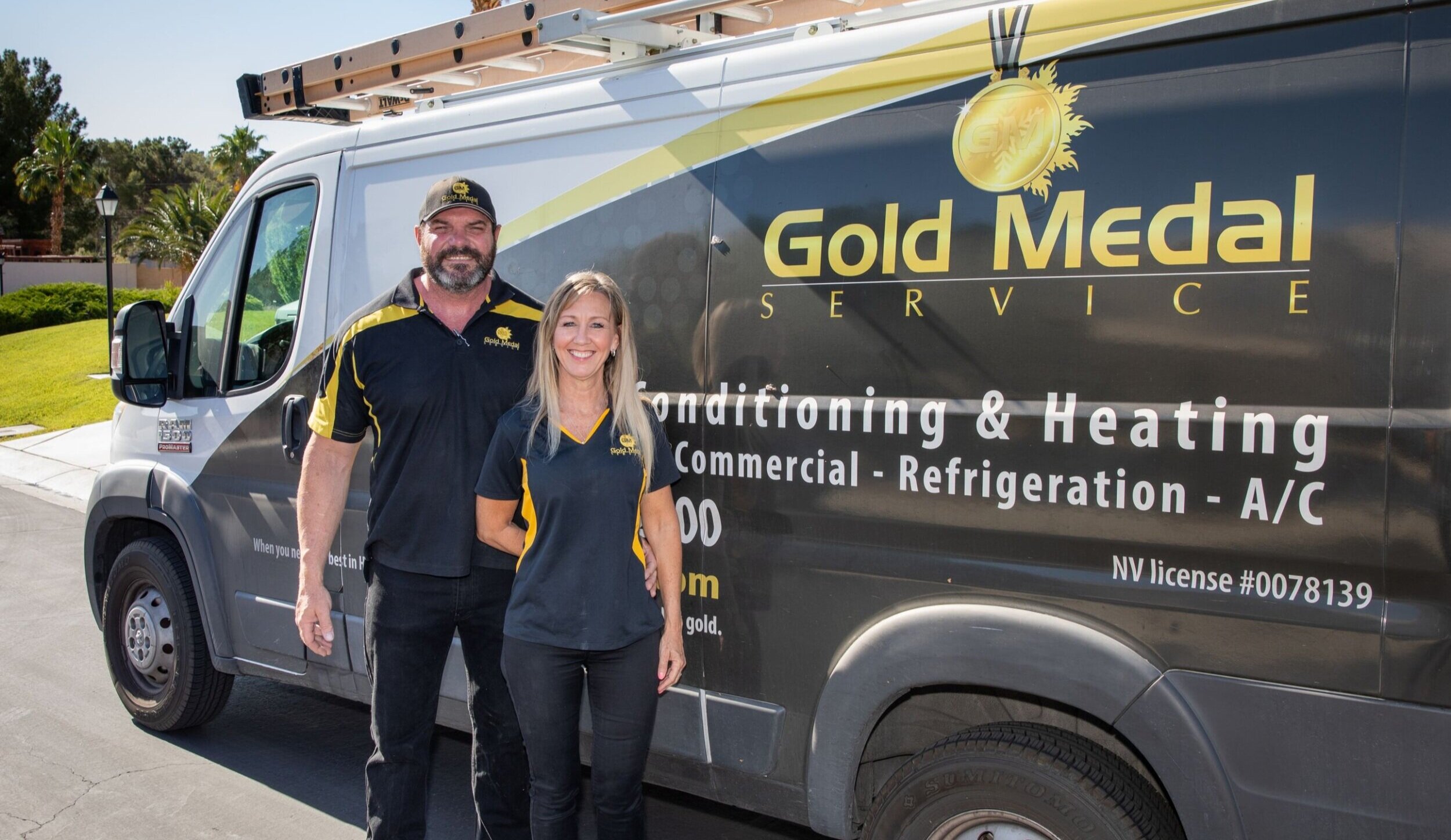 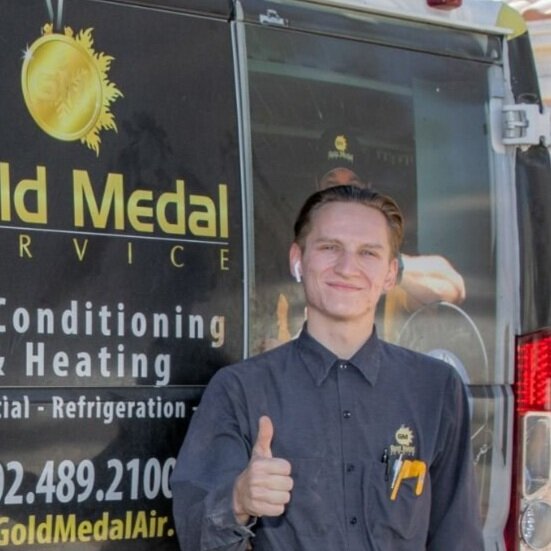 With proper care and maintenance by an HVAC professional, a mini-split AC can last over ten years. 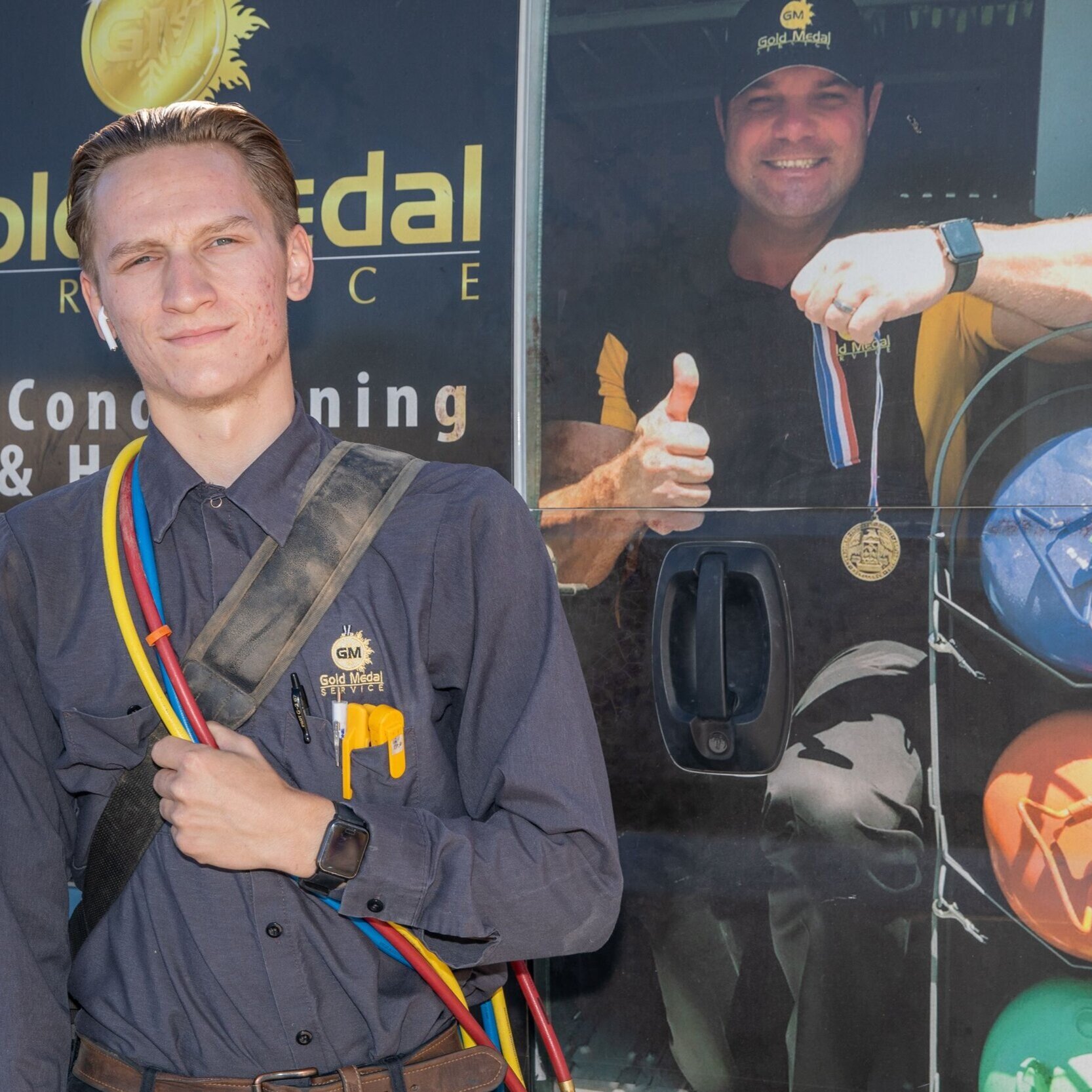 Some reasons that make it essential to keep the furnace in the best condition and ensure the HVAC system's long-term safety: 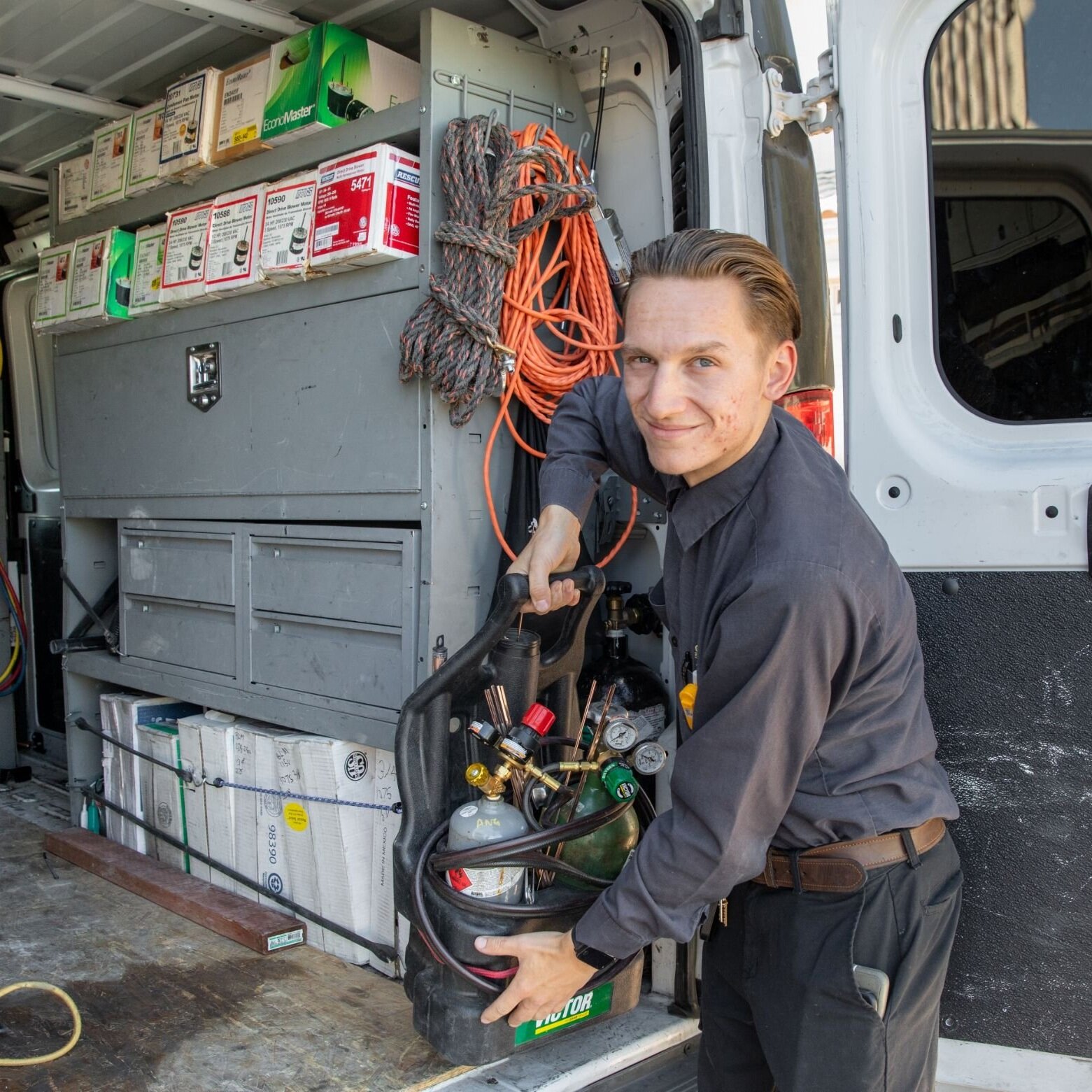 proper installation and configuration of a thermostat is still essential for cutting down on heating and cooling costs and ensuring comfortable indoor temperatures.. 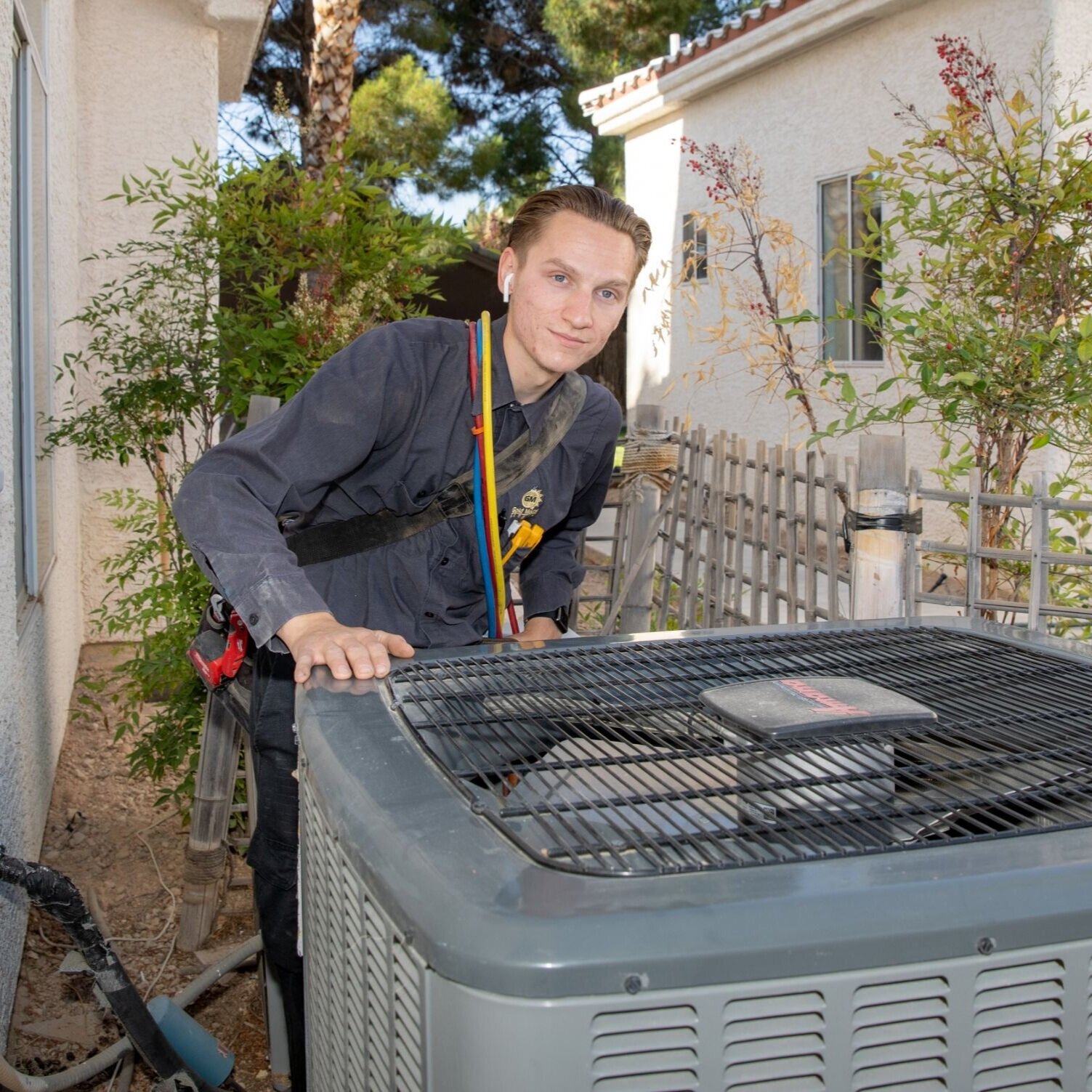 As the name suggests, an HVAC compressor compresses the refrigerant to get the right pressure and temperature that flows through the evaporator coil as a hot, high-pressure gas